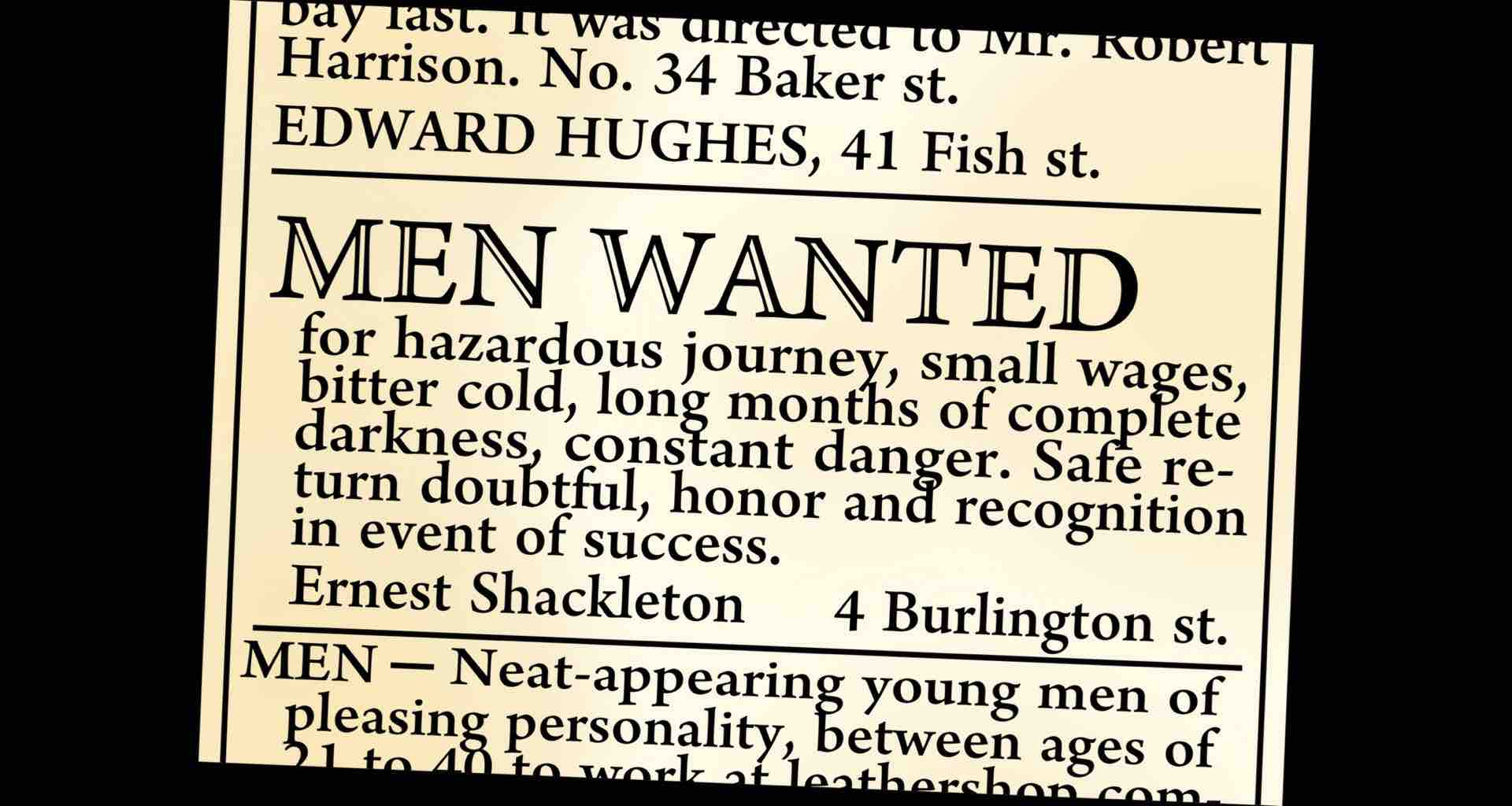 Ernest Shackleton lived in the era called the Heroic Age of Antarctic Exploration. At 22 he had a dream he would cross one of the poles. It wasn’t until 1914, when he was entering midlife that he set off on a journey to become the first explorer to cross the Antarctic on foot. Raising funds for the expedition was just the first epic obstacle he had to overcome.

Of course it wasn’t a feat he could pull off alone. He needed to acquire a crew and so he plastered an advertisement around town which read: Men Wanted: For hazardous journey. Small wages, bitter cold, long months of complete darkness, constant danger, safe return doubtful. Honour and recognition in case of success.

The honesty of his ad ensured that the vast majority of people were repelled by the invitation.

The timing certainly didn’t help matters. World War I had just started. Shackleton was prepared to stay and fight but as the trip was set and paid for the government ushered him to go.

For so many reasons the trip almost didn’t go ahead. Often we entertain a fantasy that our Calls to Adventure should be enticing, rather than terrifying. Consider a modern example of Shackleton’s ad for intrepid explorers.

The Esalen Institute in California runs over 500 personal-growth workshops each year at their retreat centre. The Max is regarded as the scariest of them all, with the write-up in the Esalen catalog saying, “that if it tightens your bowels just thinking about it, it’s probably the right workshop for you.”

“The game is risk,” it says, describing its “extremely challenging combination of hot-seat work, stage performance, role-playing and improvisation. You’re going to turn yourself inside out, engage in a rigorous exploration of your emotional limitations, all while having a former est trainer hammer at your defense mechanisms. Oh, and you’re going to do public speaking about your most intimate issues.”

Naturally, this is a fairly off-putting advertisement for most people. But not all.

Having set sail, Shackleton and his crew were about to reach land when the weather turned against them. Once their ship became trapped in the ice there was no chance of them completing their feat. As the leader of the expedition, Shackleton was faced with a choice. He could adopt the response that most crews took when faced with desperate circumstances. This meant being overtaken by a hopelessness which festered into infighting and eventual death. The alternative was to embrace change and turn the situation into a new challenge, that of safeguarding the lives of his crew.

Since having his dream of successfully crossing the Antarctic on foot at age 22, it required enormous strength of character to let it go and not become despondent by the turn of events.

During the early stages of our adult development our egos tightly hold the reins. But come midlife, the fullness within our being wants to emerge and our psyche snaps the old reins. The egoic vision of where life will take us and who we will become starts to be modified by a universal intelligence that has a much better design in mind for us.

In Shackleton’s case, he had to abandon one cherished goal and shoulder another that was forced on him by circumstance. In accepting that the goal of his expedition was no longer possible he shifted his focal point on maintaining morale.

Shackleton’s approach to change not only kept his men alive, it resulted in the greatest survival story of all time. For almost 500 days they were trapped on a sheet of ice. Of the 28 crew members placed in the harshest and most hopeless conditions, not a single man perished. Ironically, they achieved far more renown than if they had achieved their original goal of crossing Antarctica.

In writing about what he and his men had endured, Shackleton said:

We had pierced the veneer of outside things. We had reached the naked soul of man.

If the crew of the Endurance knew what they were in for, none of them would have stepped on board that first day. So it is with each of our hero’s journey or individuation.

Judged by its initial objectives, Shackleton’s expedition was a colossal failure. His ship never reached Antarctica. None of its 28 crew members set foot on the continent. The journey strained Shackleton’s finances to breaking point, and at the end of it, in late 1916, its fame-seeking protagonist found his accomplishments eclipsed by the horrors of World War I.

Shackleton was forgotten by society, only finding validation long after his death in 1922.

In 1959, Alfred Lansing's Endurance: Shackleton’s Incredible Voyage was published. It was the first of a number of books about Shackleton that began to appear, showing him in a highly positive light.

The trip was so remarkable that today there are ships that regularly go on Antarctic cruises for people who want to see where the Endurance expedition took place. Others live vicariously through reading about Shackleton’s exploits or the exploits of other intrepid characters.

Far more rewarding, however, is to individuate and reveal our own great resources and adventures to be shared.

Join us in doing just that, via our Intrepid Series of personal development workshops based on Archetypal themes that relate to developing our complete selves and expressing our gifts in the world.

More about our next workshop in the series