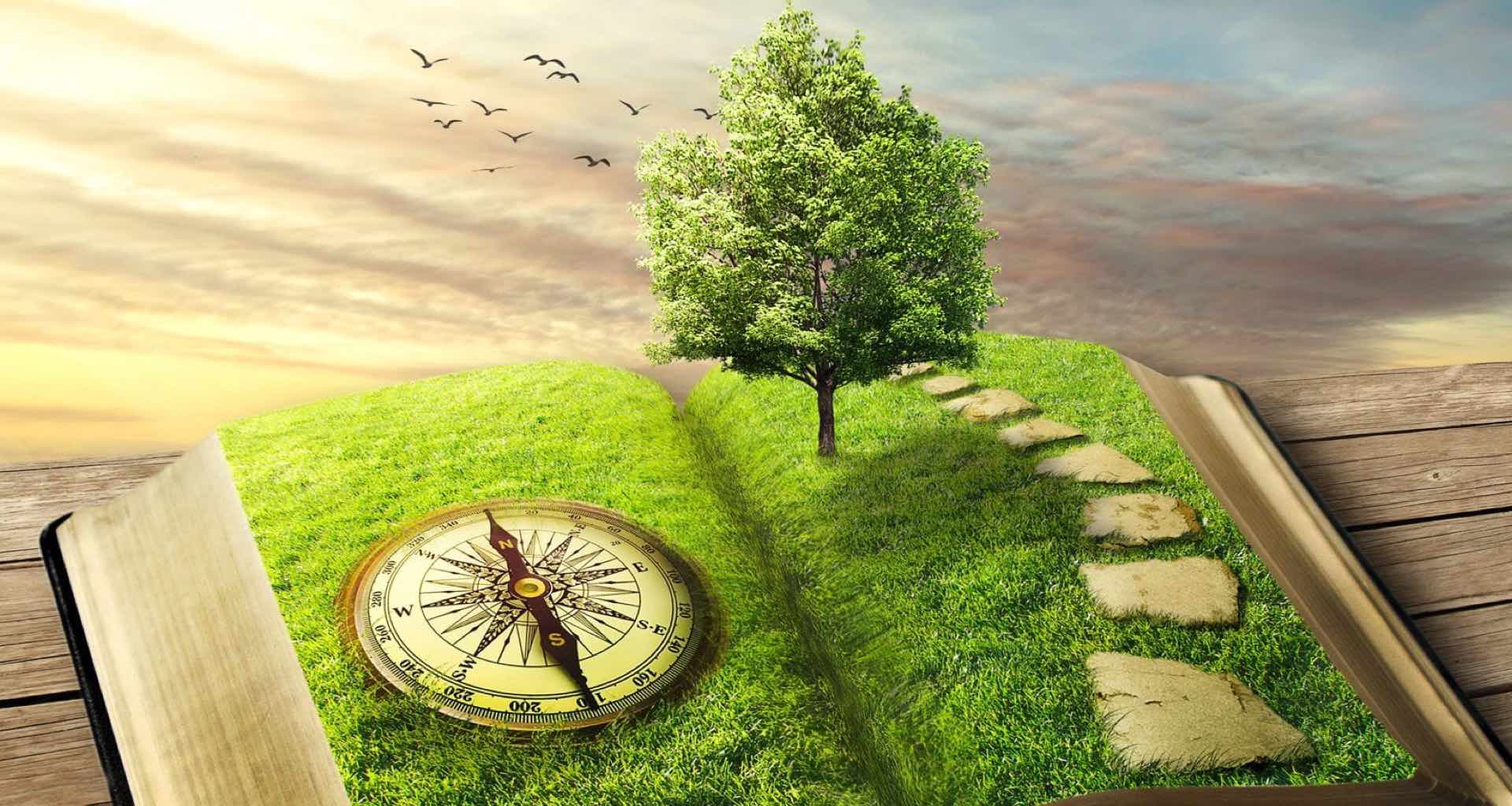 The phrase the pursuit of happiness was coined by Thomas Jefferson when he wrote America’s Declaration of Independence. Jefferson was a fan of the philosopher Epicurus who was one of a number of ancient Greek sages fascinated with human happiness. For well over 2 000 years people have wrestled with the question of happiness. We continue to ponder its importance, navigate the best way to find it and most perplexing of all, wonder how to hold onto it.

Some people don’t think about it at all, preferring to adopt the strategy of ignorance is bliss. Whether consciously or not, they have still chosen a philosophy to live by.  It works for some - Dostoyevsky’s protagonist in the novel, The Idiot, for instance. But buffeted by life’s slings and arrows, most of us actively search for a worldview to make sense of things.

The Greek philosopher, Aristippus, argued that obtaining pleasure should be our primary focus. He advocated hedonism as the best school of thought when it came to pursuing happiness. With the human condition being difficult and austerity lacking much appeal, it is a reasonable viewpoint. At an individual level, it tends to fall down though. Inspect the life of anyone who has seen pleasure seeking drift into addiction and the result is never enviable. Collectively it becomes a nightmare. Imagine a world composed of people predominantly like Jordan Belfort aka The Wolf of Wall Street?

At the other extreme is an ideology spruiked by Zeno of Citium, who boldly declared that “Man Conquers the World by Conquering Himself.” Stoicism advocates the development of self-control as a means of overcoming destructive emotions. If Hedonism strives to seek pleasure, Stoicism strives to detach ourselves from it. It takes a more contemplative approach to life and advises we look within to find happiness rather than chase fleeting and artificial means. But it too comes with some pretty heavy downside. If hedonism argues that life is only to be enjoyed, stoicism can go too far the other way and suggest that we must embrace a grim endurance of tolerating, rather than transcending life’s adversities.

For centuries humanity has been pursuing the stoic approach of working hard in order to survive. The Japanese have even had to invent the term, Karoshi, which literally means death by overwork. Figures vary as to how many lives it claims each year. Some say it is as many as 20 000. Having largely moved beyond survival needs, many of us have grown out of touch with a healthy appreciation of pleasure in life, not to mention meaning. As Viktor Frankl pointed out, “As the struggle for survival has subsided, the question has emerged: survival for what? Ever more people have the means to live, but no meaning to live for.”

Reflecting Eastern thought, the Buddha advocated the Middle Path, referring to a peaceful way of life which negotiates the extremes of harsh asceticism and slavish pleasure seeking. Aristotle felt similarly, arguing that we should aim for the mean or the balance between two excesses. And so a third philosophy was put forward, epicureanism.

Epicurus agreed with hedonists, in that seeking pleasure should be our aim. But he differed in believing that the pleasure we should seek should be long-term, serene and reflective. He advocated continual learning in order to find peace of mind. His ethos was that the more modestly we live the more time we can devote to gaining knowledge of the workings of the world and the limits of one's desires.

It is a view that has much to offer but also carries its own limitations. It argues that the most that we can aim for in life is freedom from anxiety and the absence of pain. It warns you to forget about seeking bliss, which is considered an impossible expectation and suggests you just settle for mild contentment. There is an element of opting out with this philosophy. Regarding marriage as a threat to one's peace of mind, Epicurus lived a celibate life. Relationships invariably carry a certain amount of disharmony, but wellbeing experts assert that a healthy partnership is quite often our greatest vehicle for growth and happiness.

Whether consciously or unconsciously, you are likely to have adopted one of these philosophical outlooks, when it comes to how you seek happiness.

In addition to the three main belief systems relating to happiness, there are also three primary determinants of happiness. Sonja Lyubomirsky, a psychology professor, has spent her career as a research scientist studying happiness. She presented her findings in a work she called, “The How of Happiness: A Scientific Approach to Getting the Life you Want.”

Her research into happiness looks at the amount of variance between individuals that is explained by specific variables. She argues that our individual level of happiness springs from three primary sources. 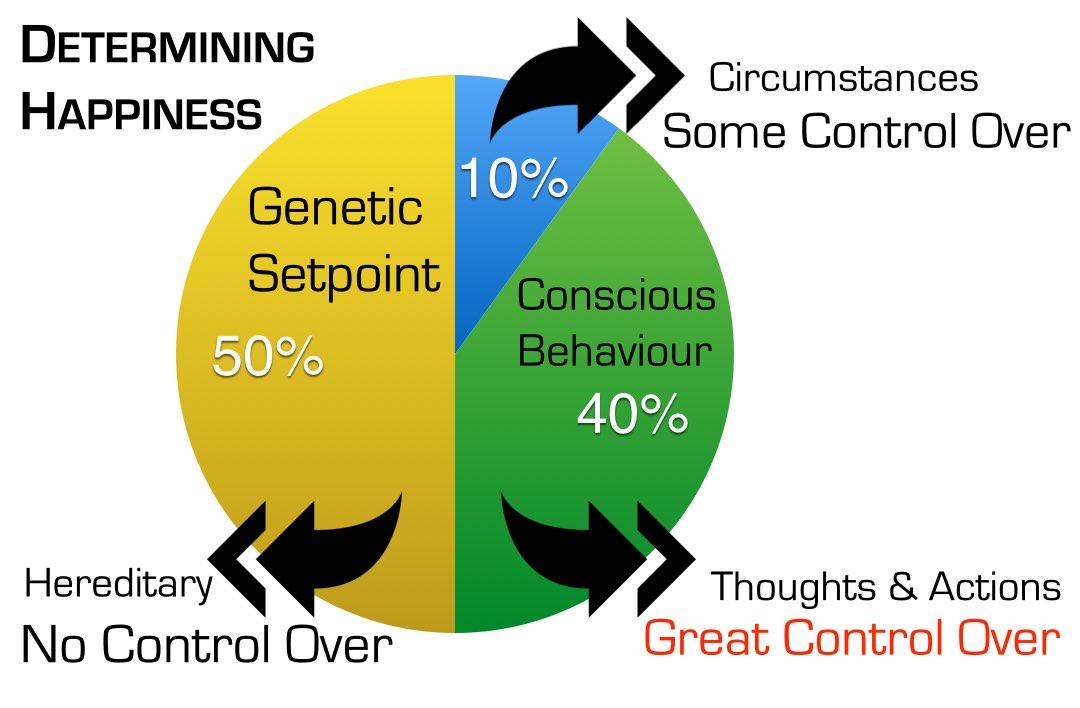 The first is hereditary, or our genetic set point and this contributes 50%. Temperament, like our disposition to weight gain, is largely inherited.

The second is our life circumstances such as whether we are wealthy, beautiful, healthy, married etc. A great irony is that it only explains 10% of the variance and yet the average person spends an inordinate amount of time attempting to change their circumstances only to find little impact on their wellbeing. In her memoir, Embrace: My Story from Body Loather to Body Lover, Taryn Brumfitt recounts her efforts to create the perfect body only to find that when she did, she was more miserable than when she started. A beauty makeover or body overhaul is just one form of hedonic treadmill we get stuck on. For others, it is anticipating the next holiday, job, lover, house upgrade, shopping spree, more modern car or weekend bender.

The third factor is intentional activities, which accounts for the remaining 40% of our happiness. Lyubomirsky maintains that we can't shift our genetic set points, and changes in circumstances do not have a lasting impact on our happiness, but we can improve and sustain our happiness through more conscious thinking and healthy behaviours:

“If we observe genuinely happy people, we shall find that they do not just sit around being contented. They make things happen. They pursue new understandings, seek new achievements, and control their thoughts and feelings.”

The philosophy presented at A Different Drummer attempts to adopt the best qualities of the three most commonly held world views (Hedonism, Stoicism and Epicureanism) while placing a strong focus on the third, and more critical determinant of happiness, intentional activities.

Joseph Campbell introduced the concept of ‘the hero’s journey.’ He used just three words to capture the essence of it, Follow Your Bliss. The idea is that you when you find that thing that makes you feel utterly alive, then develop it and share it with the world, then everyone wins. While the idea may sound simplistic enough, the execution of it is not.

Chuck Close is among the small minority of people who spend their time doing what they love most. In his case, painting. In an interview he reflected on the prevailing approach most people take to work, which sees it as a means of acquiring the money to pursue satisfaction elsewhere:

“They can't wait for Friday, and then they try to make up over the weekend for how numbingly boring their life is all week long. So they approach the weekend with a kind of desperation, like I've got to have fun and I have to mitigate for how awful the week has been and I better have some toys... I just can't conceive of living that way. Upwards of 80% of the public say they get no pleasure whatsoever from what they do for a living. And that’s most of their life.”

Chuck paints 365 days of the year, not because he needs the money, but because he loves what he does. He might have created an ideal life for himself, but like practically every artist who has succeeded, it has taken a phenomenal amount of hard work, courage, failure and persistence.

Helping people determine their deepest passion and align it with a sense of purpose, or contribution is at the heart of what the Pursuit of Happiness School is about.

It is universally recognised that when asked what personal value people hold most dear, happiness is overwhelmingly rated as the most important value - greater than wealth, health or love. But appallingly low levels of job satisfaction, increasing rates of mental health breakdown and the failure of happiness levels to rise over the decades (30% of people reported being very happy in 1956, in line with today’s statistics), suggests that we have a poor understanding of how to attain happiness.

The word, school, often carries bad connotations, but we can think of schooling simply as a very long stretch of learning. So too with attaining happiness. It takes a great deal of self-reflection, willingness to grow and courage to take initiative in life, in order to meet with it. Hence the importance of building community, or finding one’s tribe, another core foundation in what we do. As Albert Einstein once said, “My awareness of belonging to the community of those who strive for truth, beauty and justice has prevented me from feelings of isolation.”

Follow us on facebook to receive notifications of our events or subscribe to our email newsletter to stay connected and glean further insights into finding greater happiness and a more purposeful life.

For more understanding about our philosophy, background and experience in group facilitation, please take a look at our blog